Vista Alegre requires the use of cookies for the normal process of use, as well as other functionalities that include traffic monitoring and promotional marketing. Some of this information may be shared with our social networking, analytics and marketing partners. These partners may cross-check this information with other data you have provided to them or that has been collected through the use of their services. By continuing to use our site, you consent to the use of these cookies.
Detail
Get to know our Privacy Policy
Online Store Support (888) 506-0526 SUBSCRIBE NEWSLETTER
Log in Register
Wishlist(4)
Shopping cart(625)
There are 625 item(s) in your cart. 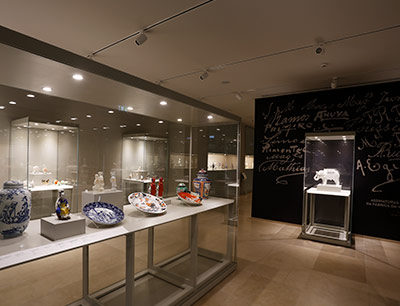 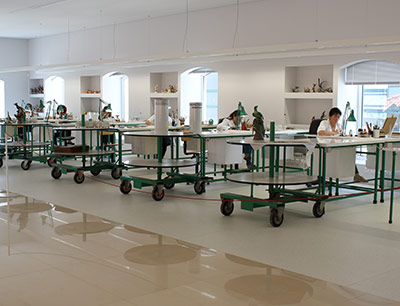 The Vista Alegre Museum was awarded by APOM with an Honorable Mention in the “Best Museum of the Year” category, and received the APOM 2017 Awards in the “Cultural Merchandising” and “Museography Work” categories.

The Vista Alegre Museum is also a member of the European Route of Industrial Heritage.

It has been a tradition of the factory to preserve and keep the memory of the Vista Alegre’s artistic porcelain production alive, inherent in the prestige achieved by the brand during the 19th century. Although the best pieces have been collected since the beginning of production, the first organised museum appeared only in 1947 and it was housed in the palace, near the Capela da Vista Alegre. In 1964, the museum was expanded and opened to the public, being transferred to the old factory buildings, a place with space to accommodate the heritage of our porcelain pieces, documents and drawings. These facilities were renovated in 2001.

Between 2014 and 2016 the Museu Vista Alegre underwent major improvements, which included the rehabilitation of the existing building and the expansion of the exhibiting spaces, including the integration of two old ovens of the company in the reception area of the museum to make them stand out.

The new museum intends to show the factory’s history, the aesthetic evolution of porcelain production and its significance in Portuguese society of the 19th and 20th centuries through one of the most complete museum collections of that kind, made up of more than 30.000 pieces.

The building of the old Creche da Vista Alegre [kindergarten] was also renovated and reconverted into an educational facility for the Museu Vista Alegre. Dating back to 1944, this space was for caring for the workers’ children, thus providing important social support for the community. In the future, its use will be to stimulate a rich and diversified cultural programming which may promote the connection between factory and visitor, creating learning opportunities, namely through ceramic painting or paste modelling.

The Museu Vista Alegre has taken on the mission of promoting the protection, investigation and interpretation of the industrial heritage of the Fábrica de Porcelana da Vista Alegre [porcelain factory], inspiring and motivating visitors to get to know the ceramic culture through the collections as well as the values of Vista Alegre.

Fulfilling its strategical goals, the museum aims at having an international dimension, at becoming an inspiring space; open to sharing and promoting knowledge, oriented towards the study and interpretation of ceramic culture.

- To grant the collection and protection of the industrial heritage of the Fábrica de Porcelana da Vista Alegre, fulfilling its museum functions;

- To boost the public profile of the museum and to provide quality service to the client;

- To undertake credible research for the benefit of the general public, and to interpret and communicate research results;

- To improve the quality of interpretation and accessibility of museum collections and of the industrial heritage of the Fábrica de Porcelana da Vista Alegre;

- To grant efficient and sustained management of financial and heritage resources.